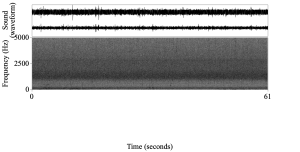 This recording was taken in Pitzer Courtyard on the campus of Claremont McKenna College. The courtyard is part of the Kravis center, and features a stone-laid fountain which honors the lives of CMC students who died pre-graduation. This recording was taken on a Sunday morning at around 10 AM, allowing the sound of the water to remain largely uncontaminated by general student activity. If this recording were to be taken 24 hours later, the fountain’s drone would be accompanied by the sound of rolling longboards and distant conversations.

This recording was captured with the Shure MV88 portable microphone, which attaches to an iPhone and operates via an iOS app. The app allows for control over the directionality of the input. For this recording, I used an omni-directional setting which captures the full 360 degree soundscape.