Description of the space: 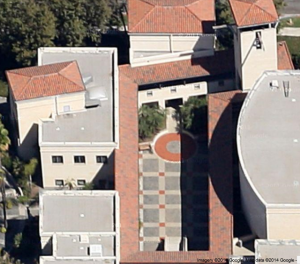 Recording setup: The recorder (on its tripod) was set in the middle of the courtyard on the concrete ground, and all backpacks and other recording materials were moved far out of the way.  The balloon was popped approximately three feet in front of the recorder and four and a half feet above it.

As we can see, the above sound images show a fairly fast initial drop in sound at the onset of the balloon pop (down 30dB), followed by a slower decrease to the minimum level of post-pop sound.  We can try to account for these characteristics by analyzing the spatial features of the vicinity of the balloon pop. Seaver Theater is normally a fairly quiet space, but because of the construction of the new art building nearby, the background noise level during this time was fairly high.  I thought that recording around 12:30 would minimize potential conflicting background noise, since students would not be walking to class at the theater and the many of the construction workers would be on lunch breaks.  Also, there are many trees and branching plants in and surrounding the courtyard, so many birds nest here (as one might hear on this recording before the balloon pop).  This fact might be able to explain why the sound level actually dropped to 26.2dB, or below the level of pre-pop background noise (which was about, on average, 32.4dB).  The birds’ reaction times to the noise would then also contribute to how fast the sound level dropped to its minimum point.

Furthermore, the courtyard of Seaver Theater is surrounded by tall, cement walls, where sound can bounce off and reverberate.  Indeed, there is even a tall, cement staircase (at the southernmost part of the courtyard in the satellite image above) that the balloon was popped from about 8 feet away.  There are only a few places where sound can escape.  The most obvious is from the top, as no ceiling exists in this courtyard.  There are also various entry and exit-ways through which sound may escape.  Thus, although the sound might have dropped fast at first (due to the initial decay out of the courtyard through the top opening and sides), bits of it were still left over, reverberating back and forth off the high walls until all the sound was finally able to “bounce” out of the courtyard and into the sky.