About the soundscape: This was recorded at a Pomona-Pitzer vs. CMS baseball game during parents weekend. I was recording from the bleachers slightly above the field on the third base side.

Signals in this soundscape include the applause and encouragement from parents and fans in the stands.

The main Keynote in this soundscape is the crack of the bat against the ball. A defining and unique sound of a baseball game that tells you why the people you initially hear chattering are there.

The crack of the bat is also an archetype, as well as some sounds that were cut off by the shortening of the recording to 2mb. One important archetype is the introduction song that is played for each new player who comes to bat. This is also a signal because each player has his own snippet of a different song played, communicating who is coming to bat.

The only soundmark I could hear would potentially be the birds chirping in the background. 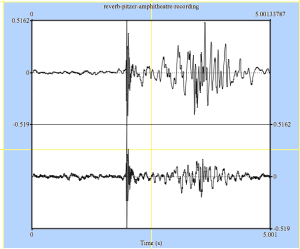 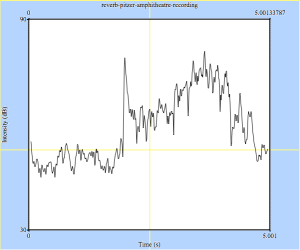 Description of the Space: I went to the amphitheatre in between Pitzer’s freshman and sophomore dorms. This area is outdoors, with large buildings relatively nearby to the north and south, Claremont boulevard is to the east, and another dorm is much farther away to the west. Immediately, the balloon was surrounded on all sides by amphitheatre seating.

2.75 seconds to return to pre-pop level.