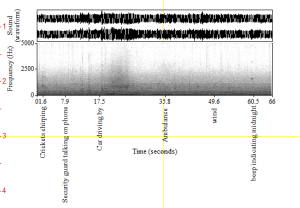 Recording Setup: This sound was recorded on Thursday, September 30, 2021, at 11:59 PM at the Benton Art Museum. The TASCAM DR-40 microphone was put on the floor in the courtyard of the art museum facing northeast, in the direction of N College Ave.

Description: There were no students around, just a security guard who was talking on the phone. The security guard was walking around, so their voice drifts in and out of the recording. A few shouts from students can be heard from afar. At this time of night, there were many crickets chirping, which can be heard very clearly and consistently throughout the recording. A car driving along College Avenue could be heard driving by at a relatively slow speed, as indicated by the gradually increasing sound of the car approaching and the gradually decreasing sound as the car passes by. An ambulance can also be heard in the background. The wind can also be heard faintly, which drifts in and out of the recording. A beeping sound was chimed when it was 12 AM. Because this recording was made very late at night, it would be very different compared to if it was made during the day, or if it was made on a Friday/Saturday night, where more students would be out and about along the dorms on the other side of Bonita Ave. Since most crickets only chirp at night, this sound is also unique to this recording which was made close to midnight. Surprisingly, there were more cars than we expected to be driving at this time. 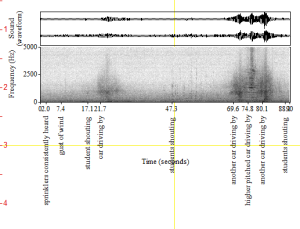 Recording Setup: This sound was recorded on Thursday, September 30, 2021, at 11:35 PM at Carnegie Building. The TASCAM DR-40 microphone was put on the sidewalk in front of the large steps that lead to Carnegie, facing southwest.

Description: The sound of the sprinklers is consistent throughout this recording, which serves as a keynote. Cars passing by, students shouting, and the wind are other noises that can be heard. When the recordings were made, it felt like the cars were passing by very quickly, but in these recordings, the sound of the car seems to pass at a slower pace. The cars are the loudest parts of these recordings. Various student voices can be heard from afar, it is hard to decipher what they are saying. The students’ voices are an archetype of a college campus. The sound of the wind can also be heard in the background, which fades in and out. During the day, Carnegie is very lively as many students go in and out of the building and are walking around campus to go to class, study, and meet with others. The lack of people allows for natural sounds like the wind and sounds we wouldn’t normally pay attention to like the sprinklers to be heard at the center. There were also more cars driving by at this time than expected, which normally we wouldn’t pay as much attention to but because there is a lack of students at this time, the sounds of cars go from being a keynote to a sound that is much more noticeable. 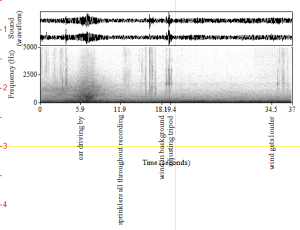