Recording Setup: (Recording device: TASCAM-40). Recorder was propped on the floor approximately 12ft away from a baseball field.

About the Soundscape: The recording was done near one of the many baseball fields closest to the parking lot. There was a youth boys baseball team practicing during the recording. The coach had some boys do drills out on the field and another coach was teaching a few boys how to hit the ball on the side practice arena. In addition, many parents were standing around the baseball field watching their kids practice.

Recording Setup: (Recording device: TASCAM-40). Recorder was set on a bench in the playground for big dogs, approximately 10ft away from the dogs.

About the Soundscape: This park has two separate playground areas: one for big dogs and the other for small dogs. Dogs and their owners not only exercise, but also socialize here. There were many dogs and dog owners on the day of the recording. Some dogs played with other dogs while others played fetch with their owners. 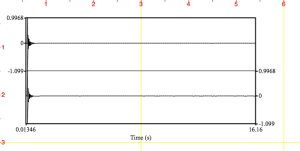 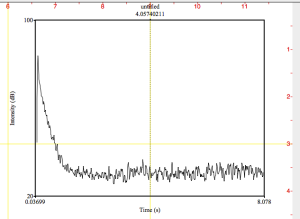 Description of the space: Bridges Auditorium, also called “Big Bridges” was built in 1931 and is located in Pomona College. This building can be described as a “free adaptation of northern Italian Renaissance architecture.” Its exterior design consists of stairs leading to its columns supporting high vaulted arches and three wooden entrance doors. Above the arches, near the top of this building, are five engraved faces and names of the composers: Wagner, Chopin, Beethoven, Bach, and Schubert. If you shout or make a sound louder than a certain threshold, the building right across Big Bridges, Carnegie, will echo your sound.

Recording setup: The recorder and the balloon were both placed about 4 inches above the ground and approximately 6ft apart in front of the center entrance door of Big Bridges.

Acoustic Description: It is interesting that the balloon pop sounded muffled or dampened in an “outdoor” atmosphere. The sound waves must have significantly bounced off of Big Bridges’s columns, high vaulted arches, and ceiling roof. However, since the microphone was placed facing Marston Courtyard and there was no wall to contain the sound, the sound waves could have escaped to the open atmosphere and decreased the maximum intensity to the point where there wasn’t a 60dB drop. In the spectrogram, there is a slight increase in intensity starting at 9 secs and a faint dark spot around 13.2-13.6 secs This is most likely due to the sounds I made while walking towards the microphone to stop the recording. There was also an airplane or helicopter in the background around that time frame.

Location: Claremont’s Metro Station is an outdoor station situated in-between streets near 1st Street and College Avenue. Providing public transportation to passengers, the train travels up to 90mph (132 feet per second) and weighs approximately 450 tons. There is a parking lot for passengers to park their cars, a shopping center, and a dog park nearby. During this recording, there were about 3-5 people waiting for the train in the afternoon.

Recording Setup: (Recording device: TASCAM-40). Recording was done near the ticket machines on a bench. Microphones were set up in opposite directions approximately 5ft. away from the train. The train was coming from the left side of the recorder.

About the soundscape: Before the metro arrived, two railway-crossing signs, each within approximately one block away in the vicinity of this station, signaled nearby vehicles to stop with 2 distinct, quick and repetitive bell-like sounds and railroad crossing gates. The train then blew its horns: two long, one short, and one long. When the train was one-half mile away from the stop, it gradually began to slow down, making an overpowering screeching noise that overrode the bell sounds. Once the train came to a complete stop, the doors opened for the passengers and an announcer made announcements. After all the passengers got on board, the doors closed and the train departed. The noise created from the acceleration of the train’s engines dominated the soundscape. However, once the train left, the soundscape consisted of people making noises.

Keynotes: Since this metro station is situated in an outdoor atmosphere and in-between streets, the keynote is composed of the everyday sound that nearby vehicles, pedestrians, and any other common organisms make; for example, people talking, their footsteps, the sound of passengers rolling their baggage, nearby car sounds, etc.  The soundscape was recorded on a windy day, so the sounds generated by the wind can also be identified as a keynote.

Soundmarks: The main sound from this soundscape is the horn: two long, one short, and one long. The train’s horn sounds are loud enough to be heard on Pomona College’s South Campus dorms such as Lyon, Harwood, etc.

Signals: The rapid bell sounds that the railroad crossing signals make and the horn of the train can be identified as signals of the soundscape. Both sounds signal the passengers that the train is about to arrive.