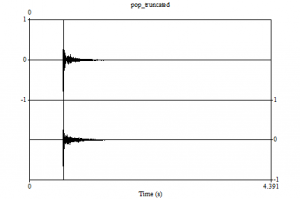 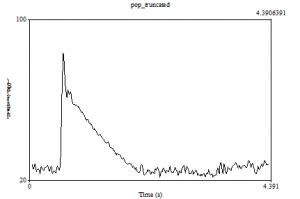 Description of the Space: The Shanahan Center for teaching and learning is the newest building on Harvey Mudd College’s campus, as of 2014. “The Shan” opens onto a set of wide stone ledges, leading down like stairs to the open basement level of the building. Sunk almost into a pit, the courtyard is nearly an ampitheater, and one could imagine performances on the rough tile ground. The stone along the walls is cool, smooth, and gray, and broken only by the glass wall of a lobby on the northern face. Above, open space stretches past the three stories of the building, the floors arranged so one would look up with the square walls framing the sky. From the first floor up, the walls are made of beige, plasticy tiles and windows. The courtyard is approximately 20 x 40 feet wide at the lowest level, with each ledge – along side smaller stairs – dropping down in steps about 3 feet wide and 3 feet tall.

Recording Setup: The microphone was placed at the edge of the lowest stone ledge, less than 1 foot from the edge and facing into the courtyard. The balloon was held 2.5 feet away from the microphone to combat ambient noise from outdoor sounds.

Acoustic Description: We see in the spectrogram above that the background noise of the space is only the 400 Hz and below range. The balloon pop is clearly seen as we have more intense presence of frequencies throughout the spectrum as it is popped. In the spectrogram, we see not just the decaying of the overall sound to the background noise, but can see that the higher frequencies fall out first, while middle frequencies (up to about 1000 Hz) remain for the longest. Overall, the reverb time of 1.36 s is fairly fast. The courtyard echoes sounds, though the echo is not contained in the recording, but the length of the pop is sustained only for the brief moment. The stone walls reflect the sound back, but the steps and floor are more porous, and absorb the sound.

The longer sustained middle frequencies seen in the spectrogram may almost be taken for a muddiness in sound; what sounds that do carry are carried indistinctly. The rest of the reverberation is a general woosh of air that might almost be confused with the wind knocking down a chair or table. Still, the reflection off of the walls is audible in the recording.

It is of note that this courtyard is referred to sometimes as the “Shakespeare Plaza,” as the hope is that it will be a live performance space. Given the echoing and muddiness, it may prove to be an unwise decision, but as the space is untested for such performances as of 3/6/14, only time will tell.