The location of this soundscape was in the Millikan building of Pomona College. Coming in from the side entrance opposite the Coop Fountain, the recording was done right by the staircase. This was quite an open space because it is in the middle of a hallway and the building is quite large while the ceilings are tall. This recording was done at around 5:30 in the afternoon on a Saturday, 25th Feb.

To record the soundscape, the TASCAM DR-40 sound recorder was placed on the bottom of the staircase on a tripod. It was left there for a total of 5 minutes and 30 seconds and was not touched.

Normally, this location is quite quiet. Since it is by two doors and the staircase, there are a lot of people exiting and entering as well as footsteps going up and down the stairs. At this time of day and this specific day, however, there is much more sound because there was a mock trial competition happening. The teams were all in the classrooms, but the ones that were preparing all stood by the staircase. The teams waiting in the hallway were cuddled in a circle and were whispering to each other discussing strategies and plans. Once in a while, there were people going up and down the stairs.

In the recording, there is not one dominant voice or person making a sound. All you can hear are mutters and small conversations that stay consistent throughout the recording. In addition, once in a while you can hear a voice saying “shh” to quiet down the conversations. There are not much loud noises. Everyone’s volume of speech is at around the same level. You can hear laughter and chuckles throughout as well. Also, there is no silence during the recording the mutters and conversations are apparent throughout but are also all in similar tone, style and volume. It sort of resembles that of an audience or soundscape right before a performance or concert, where the audience knows there is a performance coming so they are quiet in their conversations. Due to the location, the recording picks up the footsteps that go up and down the stairs.

The keynote of this soundscape is the whirring or buzzing noise in the background, most probably from the air conditioning or the nature of the Millikan building. It is consistent throughout that after a while, it just almost becomes forgotten. An example of a sound signal is the footsteps going up and down the stairs, heard in 00:13-00:18 of the recording. Throughout this time, the individual’s distance from the recorder can be tracked due to the gradual fainting of the footsteps as they ascend the stairs. At 00:23, there is a random “boop” sound that does not last long but is unique because it is very different from the consistent sound of chatter. At seconds 00:32- 00:34 is an example of a signal and a soundmark. It is a signal because this “shh” signal is meant to be listened to but also acts as a soundmark because it is a community sound in which everyone is supposed to listen to this cue and quiet down. 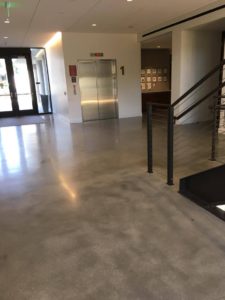