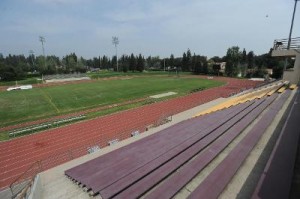 This picture was taken from the western/top-most portion of the stadium.

Location: This soundscape was taken at 2:15 on Monday, February 10th, 2014 on top of Fritz B. Burns Stadium at Claremont-McKenna College.

This space really demonstrates the sense of calmness and quiet that is present in the non-classroom-setting of the Claremont Colleges in the middle of a weekday. One keynote of this soundscape is the scraping sound of the groundskeepers shoveling dirt and sand at the softball field.  Interestingly, sound seems to carry very well from atop this stadium, and we can hear the rise and fall of the sand fairly distinctly even though it is far away.  This keynote is also probably seasonal because maintenance seems to be occurring on the field areas mainly during the peak of sports’ seasons.  Another keynote present here is wind, which I did not originally associate with the Claremont Colleges, but atop the stadium, it is quite prevalent.  The main soundmark of this stadium is the runner we hear towards the end of this recording.  This is not only an archetypal soundmark to signify that this is an athletic area with a track, but one that also distinguishes it from Pomona’s track, acting as an actual soundmark.  If we heard a runner on Pomona’s track, which does not have stadium bleachers, the sound of her footsteps would be much softer and of a different quality since track material is rubberized and absorbant.  In contrast, we hear the runner’s cushiony sounding steps at first (while he is on the track), followed by slightly reverberating, louder steps, made by the runner’s shoes on the concrete of the stadium steps as he runs up and down.