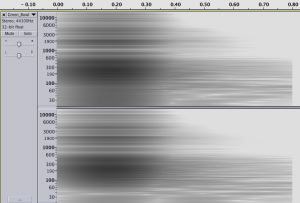 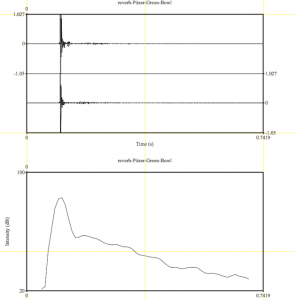 Description of the space: The Green Bowl is located between East and West Dorms of Phase II at Pitzer College. The circular depression is covered in thick grass with a secant cement wall to one side.

Recording setup: The balloon was popped down in the grassy depression. The recorder was held 2 feet away from the balloon.

This space absorbed the sound of the popping balloon quickly as a result of the grassy enclosure and the outdoor environment. I hypothesized that the secant cement wall might result in an interesting reverberation however we did not encounter any statistically significant fluctuations in the sound decay.

This recording takes place on a central eating table between the doors and the buffet area of McConnell Dining Hall on Pitzer’s Campus at 11:15 pm on a beautiful Southern Californian Thursday afternoon. Situated between the two kiosks where drinks, where condiments and silverware can be found but in the center of the eating area, the majority of sounds are characteristic of socializing or of eating.

Keynotes: In this soundscape keynotes include the muffled yet lively conversation of nearby tables and the occasional squeak of footsteps and crash of closing doors. Later in the recording, a period of electrostatic interference results in clusters of “zaps” that seem to be focused around the 40 second mark. This could be a result of interference with a device passing by, or simply an anomaly.

Soundmarks: The characteristic sounds include students grabbing and using cutlery, the sound of ice crashing into the hard plastic dining hall cups, and the sound of students flipping pages, perhaps engaging in the classic procrastinator’s study binge before a noon class. Although these sounds may be heard at other dining halls, students from Pitzer–or any college–would be likely to associate these sounds with a particular dining hall. However relevant, it is unlikely that students feel any particular attachment to these sounds except perhaps subliminally as the background to their organized feeding frenzy.

Signals: There are no signals in this recording since none of the sounds are intended to convey a particular message.

Archetypes: In this average day in a modern dining hall such as McConnell, few sounds in this recording might be classified as possessing “felicitous symbolism” (the definition of an archetype); except as that of colligate dining halls across the country.