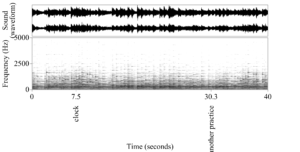 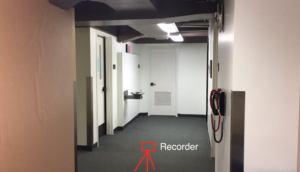 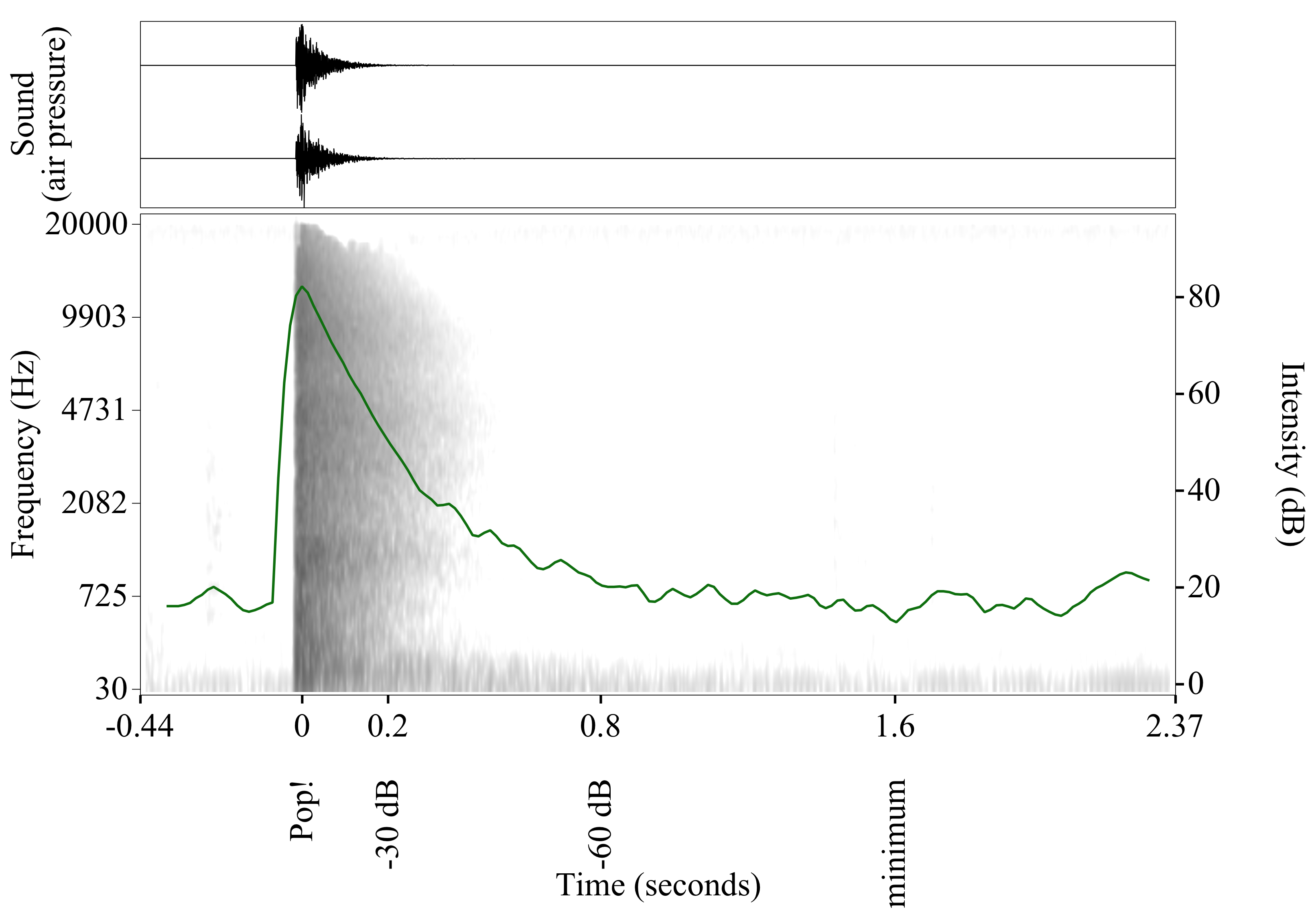 Location: Case laundry room is in the Northeast corner of 1st floor case dorm. It is the only laundry room in the dorm. The room has one door and one window facing Case courtyard. The room is rectangular, with four washers and four dryers lined up along the two longer sides. For this recording, the ballon was placed in the Southwest corner of the room. The recorder was placed on the 3rd washer away from the wall, approximately 5 ft away from the balloon. The recording was done when no washer or dryer was operating. Setup of the recording illustrated in the figure below: 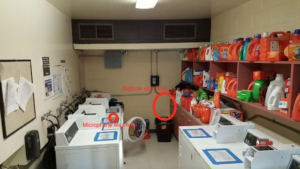 Acoustic Description: The laundry room is an enclosed space with acoustically interesting objects such as full/half-full detergent bottles and sheet metals (found on washers and dryers). The nature of this room gives it relatively damp air that absorbs sound waves and minimizes reverberation. Immediately after the balloon pops, there was audible resonance produced by the sheet metals and/or the plastic bottles; then both the pop and its resonance decreases at a rate that is surprisingly rapid for such a confined space — sounds die off almost as quickly as they would on an outdoor field. The rate of the sound’s decay and the absence of strong echo suggest that the sound vibrations are trapped between the detergent boxes, absorbed by the moisture in the air, or converted to mechanical vibrations of the sheet metals on washers and dryers. The spectrogram shows a persistent, low frequencies sound after the pop (slightly above 30Hz), which might correspond to the vibration of the sheet metals after they receive the shock; however, without further testing we cannot draw definite conclusion on what caused the post-pop low frequency sound. 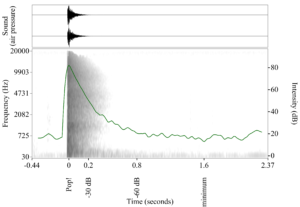 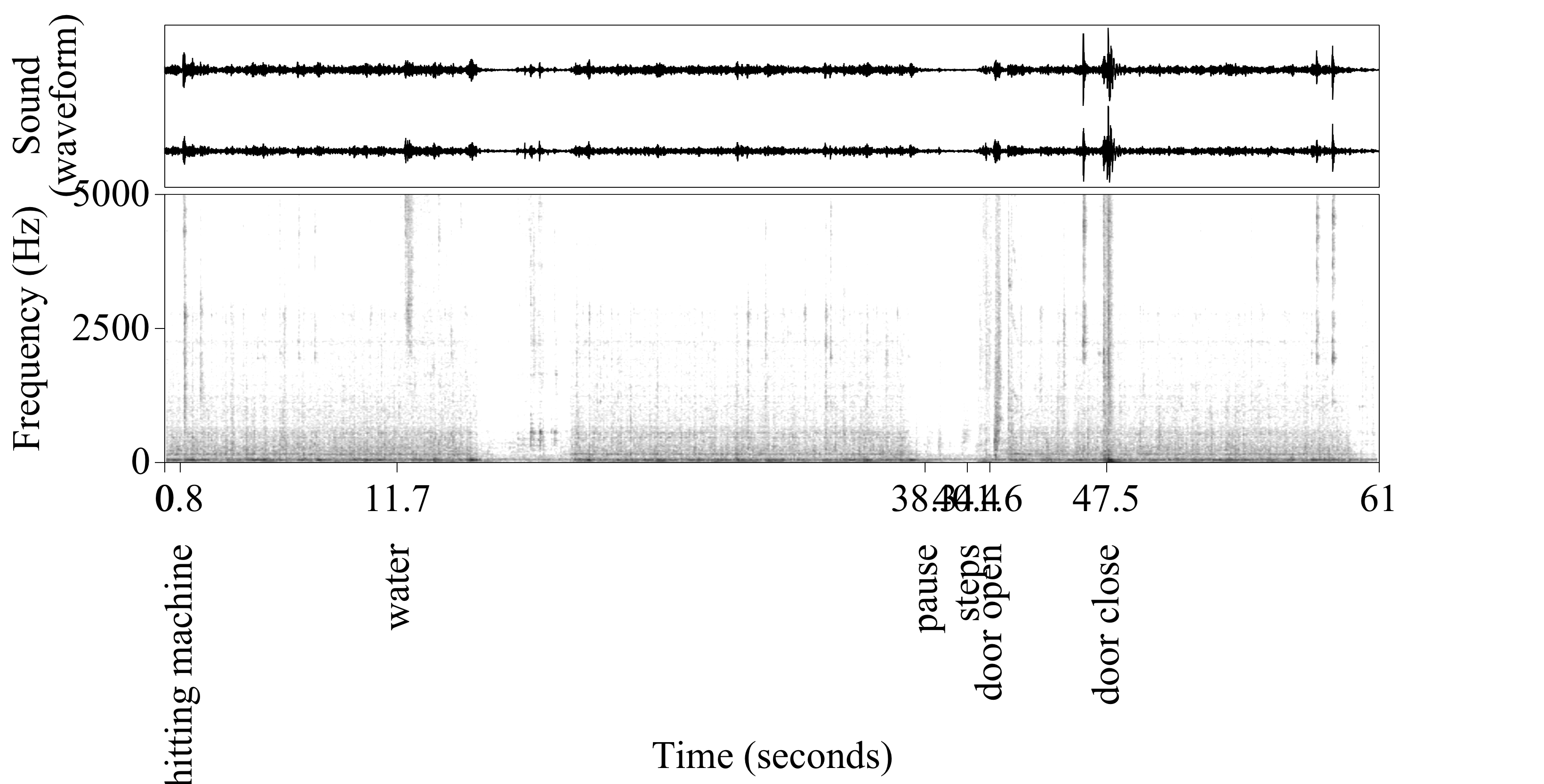 Case laundry room is in the Northeast corner of 1st floor case dorm. It is the only laundry room in the dorm. The room has one door and one window facing Case courtyard. The room is rectangular, with four washers and four dryers lined up along the two longer sides. For this recording, the microphone rested approximately 7 inches above the 3rd washer from the wall. The recording was made on a Sunday afternoon when only one dryer was operating. There is another person in the laundry room waiting for the drying to end during the recording.

the most prominent sound in the soundscape is the noise of the dryer. Since there was only one operating dryer throughout the recording, the dryer’s noise is single layered. This background noise was interrupted by the sound of water (00:12), footsteps (00:40), and the opening and closing of the door (00:42). An interesting feature of the interrupting noises is that they are very informative: a listener can visualize the actions and movement of the actor in this scene by tracing through the noise. Even without knowing what the laundry room shapes like, an listener can deduct that a person walked across the room after washing something and left the room.

The noise of the dryer is the keynote as well as the archetype of the soundscape. It is very consistent throughout the recording and it informs the listeners that this place is unmistakably a laundry room. Sound signals in the soundscape are the interruptors mentioned above: sound of water (00:12), footsteps (00:40), and the noise of the door (00:42). They provide cues to the movement of the person. There is no community sound in this soundscape, but there would be one if the recording was made when the drying finished and signaled with a “beep”.