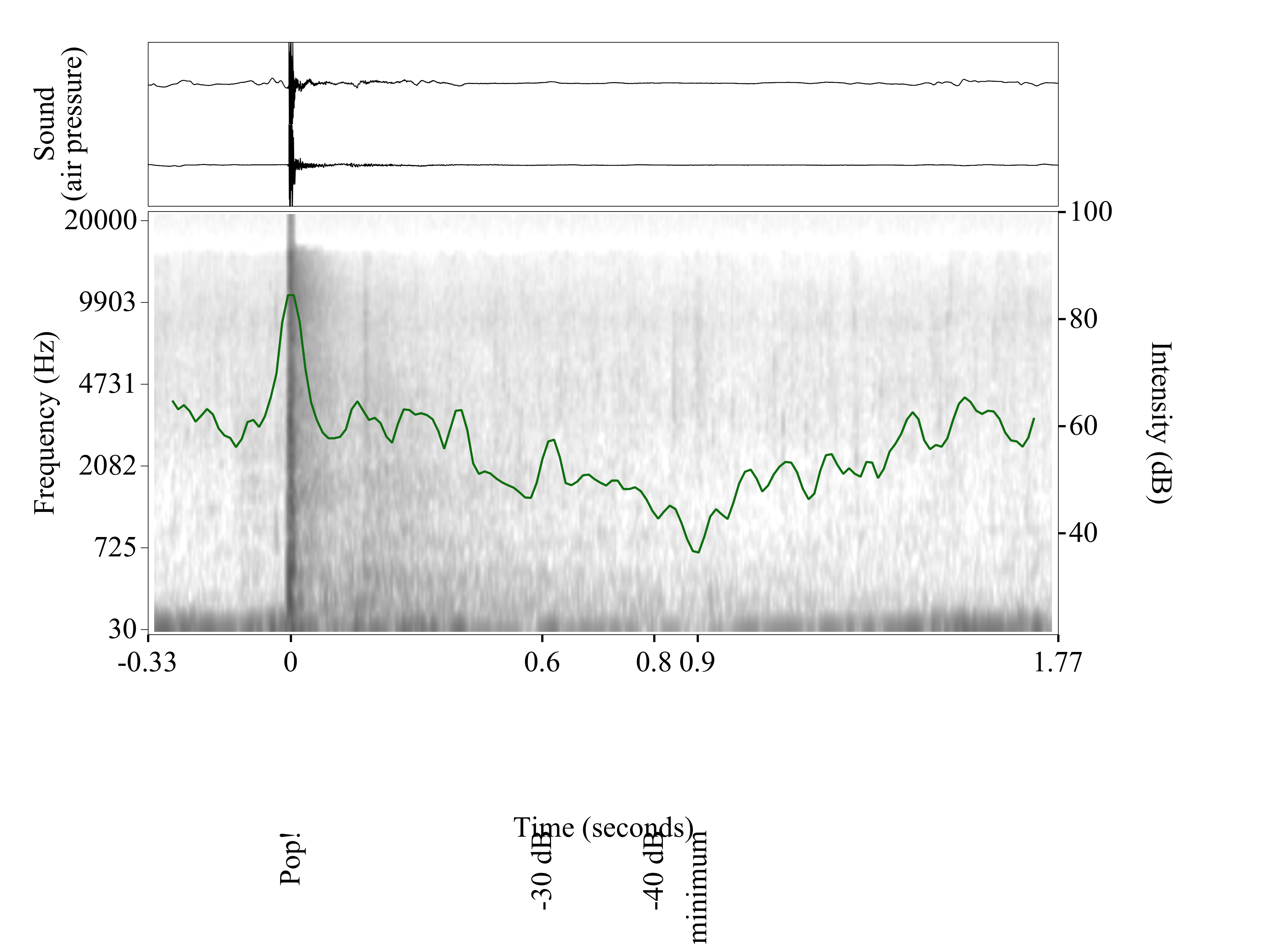 Bosbyshell Fountain is located in Bixby Plaza, the courtyard just outside Frary Dining Hall at Pomona College. The fountain was flowing at the time of recording, which is why the sound does not reach -60 dB.

This is an open-air area with no walls. There are some trees, and most of the ground is paved, but some is earth. Consequently, the sound decayed quite quickly, but the background noise level was relatively high due to the sounds of the flowing fountain. The sound graph shows several echoes, most prominently (and audibly) at about 0.18 sec. 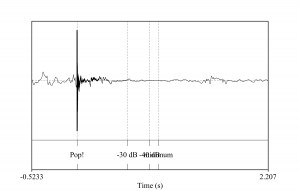 Hixon Court is a spot on the western edge of campus by the entrance of Galileo Foyer, which leads into the Libra Complex and many underground classrooms. It contains the koi pond, the Venus Fountain, and several tables and choirs. It sits at a basement level, significantly below the main walkways of Harvey Mudd’s campus.

I visited Hixon Court on a Friday afternoon at 4:00 PM. There were not many students around, but it wasn’t entirely deserted either. For the majority of the time I sat there, I heard mostly planes overhead, traffic from the north on nearby Foothill Blvd, and the continuous splashing of the fountain into the pond. I would define the Venus Fountain as a soundmark, as the sound of the water that came from it altered the quality of the surrounding sounds.1 The water was not a continuous sound, but rather a lengthy succession of short sounds that overlapped and varied in pitch. Traffic and airplanes are familiar sounds around most of the Claremont Colleges. To me the sounds mostly sound like low, continuous hums or whooshing noises unless they come quite close (especially the airplanes). The choppy quality of the water seemed to also chop up the continuous sounds of the traffic and the planes, interrupting their long hums.

In addition, the fountain seemed to have several levels of sound, mostly corresponding to the multiple tiers of the fountain itself. The water from the top tier’s spouts made up one level and bottom tier’s spouts made another. Both of these were steadier sounds, as the water came from the spouts in a mostly unbroken stream. This water also seemed to have a higher pitch, maybe because of the thinness of the water stream. Another level of sound came from water spilling in irregular sheets from the top to the bottom tier, and yet another cam from water flowing from the bottom tier to the surrounding pond. These were lower in pitch, again possibly due to the surface area of the water that fell, and was probably the main contributor the the aforementioned choppiness.

It was difficult to determine the direction of most sounds I heard from outside the court itself, but sounds from within were much clearer. While I was there, I noted that the few other visitors’ footsteps were quite crunchy due to the small drying leaves and purple flowers strewn on the ground. Footsteps outside the courtyard were inaudible—I could only tell that people were passing by above me if they were riding a skateboard, in my line of sight, or talking (though I could only hear voices, not distinguish words). The sound of a skateboard rolling over pavement is also quite familiar around the 5C campuses, but the first one I heard from in the courtyard I was unable to identify until I saw someone rolling by. The fountain drowned out most of the rolling sound, so that the only audible part was when the board crossed a crack or a bump. Without the context of the wheels over flatter pavement, the sound of the wheels going over a bump was strange.

I was also unable to identify the source of a low hum that could be defined as a keynote, as I didn’t realize that it was there until I had been in the courtyard for some time.2 While I was in the courtyard I thought it might just be part of the muted traffic and planes, but when I left I was able to distinguish the hums from one another. I believe that the softer hum was coming from climate control, lights, or a generator within Galileo Hall or the Libra Complex.

About the recording: It was made during a different visit on October 5, 2018. Fountain sounds are audible throughout; also a bird beginning about 0:55.

1 The term “soundmark” is discussed in “Soundscapes and Earwitnesses” by R. Murray Schafer, reprinted in Hearing History: A Reader, ed. Mark M. Smith (Athens: University of Georgia Press, 2004), 8. A soundmark, derived from the term “landmark”, is an integral sound- related aspect of a community, deserving of preservation because of the particular sonic qualities it lends to its community.

2 The term “keynote” is discussed in “Soundscapes and Earwitnesses” by R. Murray Schafer, reprinted in Hearing History: A Reader, ed. Mark M. Smith (Athens: University of Georgia Press, 2004), 7. Keynote sounds are sometimes unconsciously heard, the backgrounds of soundscapes that set their tones.