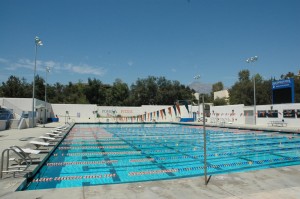 The soundscape was recorded within the walls of Haldeman pool at Pomona. It was about 8:30 pm on Wednesday, March 5, 2014, and the water polo team was mid-practice.

With the coach’s permission, I stood in the corner of the walled-in pool area and recorded the minute-long recording above with the TASCAM DR-40 SOUND RECORDER. I kept the recorder generally pointed at the center of the pool.

As previously stated, the recording documents a Wednesday evening water polo practice at the Pomona pool. It’s a full-sized pool surrounded by thick walls maybe 8 feet high. Out of the water are several other people, some coaches, some other team members not playing, and a few lifeguard chairs. The coaches are in steady but spaced out communication with the athletes in the pool. Most of the sound consists of the splashing of water, which I would label a sonic archetype of any active swimming pool as well as a keynote of the recording as it pervades the entire recording. In addition, one hears shouts and calls by the players and coaches, the blowing of a whistle, and the blunt smack of flesh hitting the ball, which is similar to a volleyball.

I would designate the sound of the whistleblowing a signal that there was some interruption in the game, be it a time-out or a goal scored. I hear the sporadic vocalizing of the team and the coaches as a sound mark, as well as the impact sound of players hitting the ball. These sounds plus that of the water allow our minds to locate ourselves in a water sports setting, and if we pay attention we can specify that the game involves a ball.