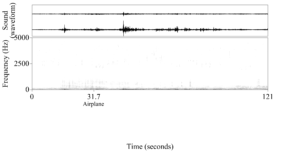 This recording was made using a TASCAM DR-40 Sound Recorder. The recorder was placed on a tripod under a tree.

The predominant sound in most of the recording is birds chirping. There seem to be multiple types of birds. Then, at the 0:31 minute mark, a low whirring noise is heard. This was due to an airplane flying over us. At the 1:23 minute mark, a train horn is heard. It is interesting that the train horn is heard, considering that the recording was made very far away from the train tracks; about a mile north. The train horn sound travels over a mile to the BFS, while all the other noises from the Claremont Colleges do not reach this spot of the BFS at all. The soundscape depicted in this recording is calm, natural and almost rural. It’s interesting to know that this soundscape was recorded very close to the dorm rooms and dining halls of the Claremont Colleges, because this soundscape tells a unique story.