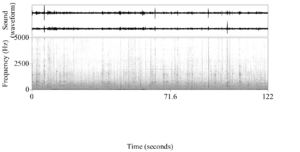 This recording was made at the Harvey Mudd Dining Hall, Hoch Shanahan Dining Commons during lunchtime. There are four big food stations at the Hoch, and this recording was taken at one of them. The food stations are one of the busiest parts of the dining hall. This is where the chefs and the students communicate. The students stand in long lines and socialize. This audio recording captures the soundscape of the peak lunchtime hour at Harvey Mudd: 12pm.

This recording was made using the TASCAM DR-40 Sound Recorder. The recorder was placed on a tripod and then on the counter of one of the chefs.

There are no major events in this sound recording, therefore non are marked on the diagram. However, the three main elements of this soundscape are the plates/utensils, the students and the dining hall staff. Throughout the recording, the sounds of plates and utensils hitting each other are the most noticeable. Some of the sounds are more distant, indicating that these are sounds coming from the kitchen/behind the counter. Speech is heard from students in English and some speech is heard from the dining hall staff in both English and Spanish. The interesting aspect of this soundscape is that there is constant commotion and noise in the dining hall. Additionally, the two audible sentences presumably from students both use the common phrase: “It’s lit”. A student says “lit, fam” at the 0:08 mark, and another student says “lit” at the 1:51 mark. While this might just be a coincidence, it is interesting to hear a commonly uttered phrase twice in the dining hall soundscape in a two minute recording.