On Monday, March 9th, 2020, Professor Cramer and I went to Bridges Hall of Music to record balloon pop sounds in order to measure how reverberant the space is. In order to formulate a clearer picture of the soundscape, we did the recordings in three separate locations: at the center of the stage, at the back of the hall, and upstairs on the balcony above stage Left. In doing so, we can compare the amount of reverb in each space. The results are as follow: 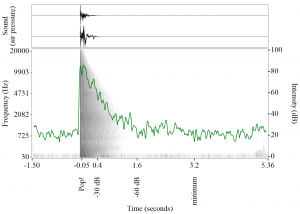 At the center stage, the reverb is actually the shortest in duration out of all three locations. It lasts for about 1.7 seconds before starting to fade away. This is most likely because there are the walls are far away from the center of the stage; however, the impulse response did not bounce off the ground as much either. This might provide an explanation to why performers on stage are not able to hear each other with great clarity. 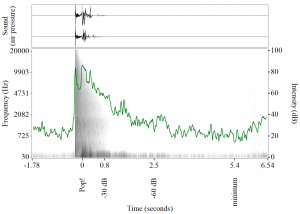 The reverb on this location is significantly longer than that of center stage; this impulse responses lasts about 2.5 seconds. This is potentially because we are closer to the wall and other wall-like surfaces, allowing the impulse response to bounce off of them. We hung the balloon out from the balcony and pop it while it’s hovering over the stage. This is why the microphone also picks up the sound of the deflated balloon pieces as they hit the stage, which is an undesired effect. 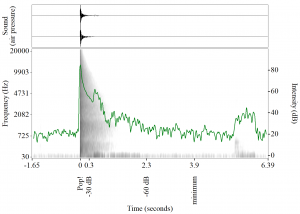 This location, just like the one above stage left, models the auditory perspective of the audience. In this case, the reverb is also about 2.5 seconds. The reason for the longer reverb time from this location is that we were very close to the back wall, and the impulse response was able to bounce off that wall to become more reverberant. This might explain why audiences are able to hear the performers very clearly from this location, even though performers might not be able to hear themselves very well on stage. This in a unique and interesting property of Bridges Hall of Music.

Now that I have analyzed the unique reverberant qualities of each of these locations in Bridges, I wanted to test how differently each reverberation affect music and sound production. I discovered technique called convolution reverb, which allows you to impose an impulse response – a recording of an acoustic space to an excitation of a signal, such as balloon pop – over sound recorded in a non-reverberant space to make it seems as if that sound was recorded in the space. An impulse response is stored in a digital signal processing system, and then convolved with another audio signal to create an entirely new audio file. Convolution is a mathematic process with the equation and graphical illustration below: 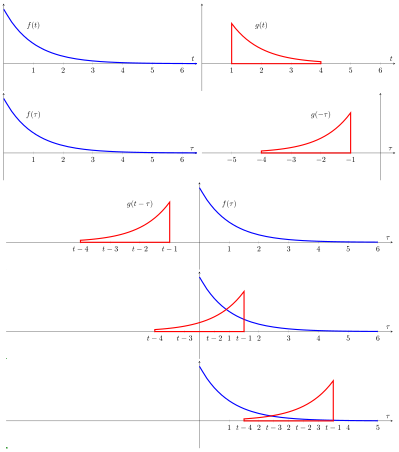 In order to create my convolution reverb audios, I used an application called Adobe Auditions, which has the convolution reverb feature built into its “effects” feature. The audio that I use to convolve with the impulse responses recorded in Bridges is of me singing the Gregorian chant “Ubi Caritas” in a very dry space with virtually no reverb (my room). I wanted to use a Gregorian chant to recreate the “solemn” feeling of Bridges. This is the original recording of me singing the chant:

Then, I imposed the three different impulse responses onto this audio using Adobe Auditions to create three separate recordings of me singing with reverb in the background. The results are as follow:

Upon comparing these three reverbs, I’ve noticed that they line up with the Praat graphs shown earlier. The recording from center stage sounds to me to be more muffled and less audible than the one recorded from the back of the hall. The recording from the back of the hall has the most audible reverb and is also the loudest. What’s interesting, however, is that the recording from above stage L is actually the most muffled and lowest in volume. However, the duration of the reverb at the end of phrases is noticeably longer than in the other two recordings. Note that these recordings are not artificially altered in any way.

This experiment is very interesting, because it models what it would be like to generate sound from each of these reverberant locations, even more so because these are all locations within one concert hall. There are noticeable differences between the reverberated audios in each location; each location in a concert hall is acoustically unique.

Just for fun, I also used an impulse response recorded by a few Youtube vloggers and sound engineers at supposedly the most reverberant space in the world – Inchindown oil tanks in Ross-shire, Scotland  The result is as follow: