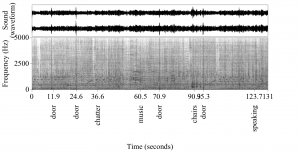 Recording setup: The microphone was set up on the back table alongside the south windows. It was pointed toward the register at the front of the Coop (on the east side).

This recording was taken in Coop fountain right before closing. The building is comprised of two conjoined rooms divided by a wall. Both the spaces are filled with tables, chairs, booths and sofas. The southern room also houses the kitchen. The outermost walls on both sides are almost completely glass. Students were studying as well as ordering food before the kitchen closed. The most prominent feature of the soundscape is the music that is playing over the speakers. The music, as well as the chattering, would be the archetypal sounds of the Coop. As Coop is a very busy location, it is possible to hear the doors opening and closing as people enter and exit. The speaking of the students is also heard intermittently throughout the recording, but it is difficult to decipher more than a few words at a time as the background is very loud. The dialogues are heard more as mumbles. There are also various sounds that are hard to identify, which are mostly people moving things around (pushing chairs, dropping books etc.).