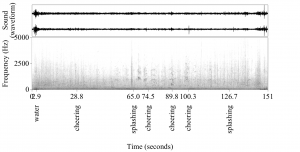 About the Soundscape:
This recording was taken at Pendleton pool during free swim hours on Saturday. About five lap-swimmers were in the pool at the time of the recording. These lap swimmers created the splashing noises that can be heard throughout the recording There was also a softball game going on at the softball diamond next to the pool. Faint music and cheering can be heard coming from this game. Occasionally, the splashing from the pool gets louder as the swimmer in the lane closest to the recorder moves to do a flip-turn on the wall. Two of the lap swimmers on the far side of the pool can be heard talking. Their voices sound more echoed compared to the voices from the softball game. This is because Pendleton pool is surrounded by concrete walls. The keynote and also the archetypal sound of this recording is the splashing coming from the lap swimmers in the pool. The cheering and music from the softball game is a signal that someone new is up to bat or that a successful play was made.