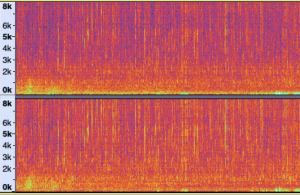 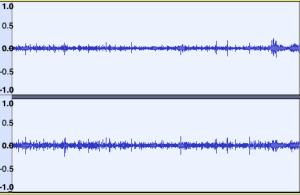 This recording is of the cube (AKA the “Living Room”) on the campus of Claremont McKenna College. The cube itself is an enclosed glass box, furnished with chairs and tables for studying and talking. The cube sits in a reflection pool, about an eighth of an inch deep with water, that flows continuously from the base of the cube outwards. There’s a concrete pathway that cuts through the reflection pool to enter the cube. The above recording was taken at this entrance. The recording reflects how the centrality of the water in the surrounding soundscape. This particular audio clip was recorded on a Sunday at 10 AM, which represents a particularly quiet time on CMC’s campus. If this recording were taken 24 hours later, we would expect the sound of the water to be accompanied by talking, passing longboards, and doors opening/closing.

This recording was taken using the Shure MV88 portable microphone, which attaches to an iPhone and operates via an iOS app. The app allows for control over the directionality of the input. For this recording, I used a semi-directional setting which still captured the 360 degree soundscape but which slightly compressed all sounds besides the ones directly in front of the microphone. This allowed for a “focus” effect in which the water becomes the pre-eminent sound, while still allowing other background sounds to be audible.