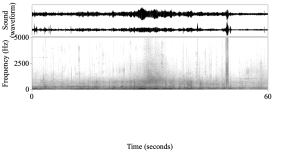 This recording is of Edmunds Hall on the campus of Pomona College. It was recorded during a passing period, at 2:45 on a Tuesday afternoon. You can hear the drone of a plane flying overhead, interspersed with conversations and the occasional car. Near the end of the recording, you can hear a longboard sliding across the pavement as its rider dismounts. Since Edmunds Hall is a classroom building, most of the conversations are held by groups of people catching up outside as they exit class. The weekday passing period allows for groups of people to briefly congregate outside of the buildings, dispersing as the classes start. This presents a different soundscape than that of a weekend, where the conversations you’ll hear will generally be held by those walking through. Fewer people will just be “hanging around” to talk.

This recording was taken using the Shure MV88 portable microphone, which attaches to an iPhone and operates via an iOS app. The app allows for control over the directionality of the input. For this recording, I used an omni-directional setting which captures the full 360 degree soundscape.