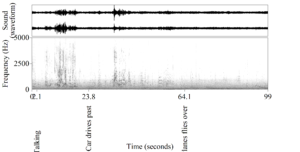 Recording Setup. The TASCAM DR-40 Linear PCM was placed on one of the steps on a tripod with a windscreen facing the wide walkway.