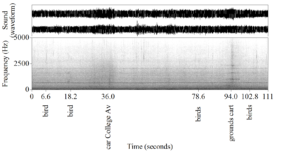 Location. A tree-filled garden stretches along the southern edge of Marston Quad, near Fourth Street.  Although college tourguides still call it a Shakespeare garden, it is now mostly planted with plants appropriate to California (including giant sequoia trees, of which one or two are still standing but not doing well in this climate).  For this recording, the microphone rested about six inches above the westernmost of the three concrete walkways that cross the garden, about 65 feet due north of Thatcher Music Building.

About the soundscape.  Two kinds of sounds are constant in this recording.  First is the steady hum of a machine that was being operated in the distance, probably at Smith Campus Center on the opposite corner of the Quad.  It’s not a sound I ordinarily hear at this site, and it was hard to ignore, so notwithstanding its unremitting presence in this recording I certainly don’t think of it as a keynote of the southern edge of Marston Quadrangle.  On the other hand, there is usually work being done by heavy equipment somewhere on the Pomona College campus, so perhaps in a general way the hum is a keynote of the College.  The second constant is the presence of bird songs and calls heard throughout the recording, mostly coming from trees and bushes.  As a constant sound that recedes to the background of consciousness, the bird sounds are a keynote of this scene–unless one is thinking about the scene as a naturalistic garden dominated by trees (or a Shakespeare garden!), in which case the birdsongs become archetypes indicating and epitomizing the kind of place this is, a garden.

Two sounds join and then leave the soundscape:  a car being driven down College Avenue (only one during the two minutes of this recording!), heard most prominently between 0:30 and 0:40, and a golf-cart-sized vehicle being driven on Fourth Street which passes close to the microphone between 1:30 and 1:40.  At the time of this recording, Fourth Street was a street with asphalt and curbs; during the summer of 2013 it was made into a wide walkway–but College groundskeepers and other support staff still travel on it in their small vehicles whose intermittent whirr, like the hum of heavy equipment, is a keynote of College life.

One might expect, on a concrete path in a College’s central quadrangle, to hear sounds archetypal of College:  the sounds of professors or students walking and talking, perhaps, or of frisbee being played.  Such sounds are absent here.  Marston Quadrangle is large and therefore almost never dense with people; and at 9:03 in the morning, those students who are awake are in class or working.  Shortly before 9:00 a few people were walking here and there, but at 9:03 people were not part of the scene.