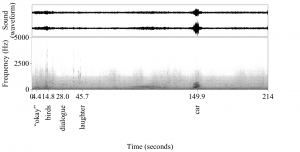 Recording setup: This recording was taken from a 3rd-floor window in Smiley dorm. The window was facing west toward the Smith Campus Center and the TASCAM recorder was on the window sill, pointed out the window.

About the Soundscape:
Very few people were wake at the time, but a group of three passed under the window. Their voices echo as they enter the hallway near the SCC since the space is reverberant. Cars can be heard throughout the recording as people commute on 6th street. The crows that often sit in the tree outside the window can also be heard calling at the beginning of the recording. Later in the recording, another voice can be heard as a student walked under the window talking on the phone. The keynote of this recording is the street sounds since they are constant throughout. There are bird sounds and rustling leaves throughout the recording that could also be considered keynotes. The archetypal sounds would be the students talking since the recording is from the window of a dorm room on a college campus.